Open Design City was born from many minds, and many ideas.

We could describe it as tools, space and community, but it is far more that the sum of it's parts.

Like any city it is filled with stories and differing energies and ideas about what it is. Below is an article published on shareable.net, which we hope will serve as an introduction to the space.

Reflections on a Hackerspace: Stories from the (Open Design) City An eclectic soundtrack resonates through the space while an LED display embedded into a Hacked Electric Guitar blinks from the desk opposite. "Welcome to Open Design City", it reads. The Bluetooth effects system created by Sebastian Burkhart serves as a constant reminder of one of the elements of this space I find so powerful--spontaneous contribution. Sebastian is also developing the wiki, runs workshops about coding, and does bluetooth programming. By day he’s a programmer, but here he builds real world devices for his own pleasure.

Since April 2010, Berlin's Open Design City (ODC) has grown from this and other principles of sharing space, resources, ideas, skills, food, and time. Inspired by other hacker spaces and Fab Labs, the ODC is formed from the collective will of the community (which itself is composed of numerous communities.) It's something we keep as intangible as possible, as everyone should feel that they can engage with the space, no matter how long they have been here for. Hacker spaces are spaces where hackers come together to share resources, skills and knowledge to build things together. FabLabs are generally more top down, but aim to provide community’s with specific tools with which they can produce anything. The ODC is applying the hacker space mentality, with the aim of becoming a Fab Lab.

We have a loose definition of Hacker here, and you are welcome to come and use the space regardless of whether you define yourself as one. In my eyes a hacker is someone who changes something to make it better, without permission. But there is no dogma in this space, and the opinions expressed here are my own. If you disagree, great--homogeneity leads to boredom.

The initial community met whilst preparing for the DMY Maker Lab festival, we had the opportunity to create a temporary maker space within an international design festival. An initial group with differing interests explored what they could do within 5 days and 200 square meters. Such events and shared actions serve to form bonds and shared experiences, stories and an understanding of personality types and skills. This was supported by the reflection recorded in the documentation of the event.

During our preparation, coworking space Betahaus witnessed the energy of the community and offered us a room, as they wanted to build a Fab Lab. After chatting for an hour about the possibilities, they told us we could move in within three weeks.

From this point we began. We attracted amateurs, tinkerers, designers, engineers, architects and artists, punks, activists and entrepreneurs, biologists, sociologists, philosophers and anthropologists, curious to document the goings-on. They discovered us through our events, activities and word of mouth, as well as our online communication channels.

We continue to grow, yet we remain undefined. From the spaces between interests, new collaborations form and ideas occur. Seeing new ideas and work spring forth from the space and put forward with confidence is a continuous source of joy.

So what is Open Design City?

We started with a deliberate absence of definition, only a request that those interested come and shape the space for themselves. When people asked us "who's it for?", we replied "You".

Into this Open Space, people brought tools, skills, projects, ideas and time, engaging with the space and each other. There is no unified vision, just overlapping dreams. In only 150 square meters, events and projects jostle, merge and coincide, the members working alongside each other and together. The space is filled with donated tools, materials and objects to inspire. The walls are adorned with images of passed events, graphics from local artists and signs attempting to bring some level of communication into the space.

Rather than seeking consensus, and engaging in over-planning, instead we provide opportunities to engage and provocations to participate. At our event planning events, people explain what they would like to do, and we tell them to do it. People say what they would like to learn, and we invite proposals from the larger community. As for the challenge of having enough physical space, we’ll have to address that problem when it arises, but currently people negotiate space use with each other.

Because of the absence of definition, the ODC is continuously changing. It's purpose shifts throughout the day, by the hands of those who use it. So instead of trying to define it, I will tell you some stories from the space to give you an idea of what can happen, what is happening and what could be.

Like the users of the space, these stories do not exist in isolation. Every action has a reaction, projects reiterate, evolve and combine to form new ideas. It's an ecosystem. I describe the development methodology as evolution rather than coming from 'god'.

We are not seeking to control what happens, but instead provide the right environment and challenges for nature to take its course. The freedom of the hacker mentality is contagious. Semiramis, who first brought knitting skills into the space, encouraged others to help yarn bomb a national heritage building after engaging with the Graffiti Research Lab Germany on a project for Transmediale (an international art event).

Many have found friends and collaborators here, and acquired new skills and abilities. They have learned to teach others, growing in their own confidence and abilities. Pedro started a Design Community here, working on social challenges and problems - one of the project outcomes helped Ben (a Venture Coach) get funding to develop a project to encourage people to reduce their energy consumption. Now Pedro is looking with us at how he can apply his methods for businesses.

Like the space itself Christophe's CNC entered the space with the permission to hack it. He constructed in his front room with a friend and a lot of time, love and patience. From the moment it arrived it has been continuously reiterated. 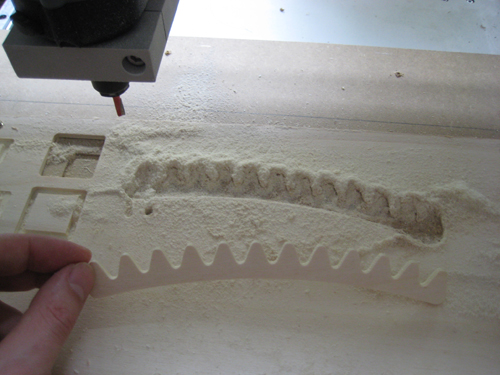 Prior to the CNCs arrival we were gifted a foam cutter in exchange for showing some Human Rights protesters how to use it. When they first entered the space they wanted us to do the work for them, having no prior experience of making anything. Within 10 minutes they were trained and happily sharing their new found skills and enthusiasm with other members of the group.

Months later they returned and built a 4m high styrofoam 20 to signify the prison sentences given to Iranians purely due to their religious beliefs. Axel previously had ideas for a CNC foam cutter, but the project was abandoned due to complexity and cost. With the CNC's arrival this quickly changed, since one machine placed beside the other created a new tool. The results were outstanding.

This hackable CNC format inspired Axel to build a Tool Bot (a Shop Bot with detachable heads). The hackable machine will be able to cut, 3D print and laser material. In the meantime, the CNC has now acquired a blueray laser head (for 50 EU), and is being used to cut foam, card, and engrave wood, with a project underway to make a separate portable machine from old printers and scanners.

With the entry of Graffitti Research Labs into the space, the CNC is now being combined with a physical interface so tags can be cut by machine after being drawn by hand.

There's now talk of an army of CNC robots, but don't worry--our intentions are friendly and at worst playful.

But it's not about the tools, or even the projects. It's the people that make the space. It's a place where Social Media Strategists can be found knitting alongside Open Source Electronics Platform enthusiasts. Hackers collaborate with students and engineers while pregnant architects sand furniture on the doorstep. In ODC 9-5ers can experience moments of artistry, freedom, and inspiration, and freelancers can up their game. Here people can take initiative, learn from one another, and collaborate.

Open Design City is a place where you have permission to engage.

Note: Big thanks to Christopher Doering, Philip Steffan, and everybody else who has contributed to the Open Design City. I’ve had to leave some names out in the name of simple storytelling, but you know who you are.

Feed for this Entry

Free and open DIY nights:
Every Monday from 19h.